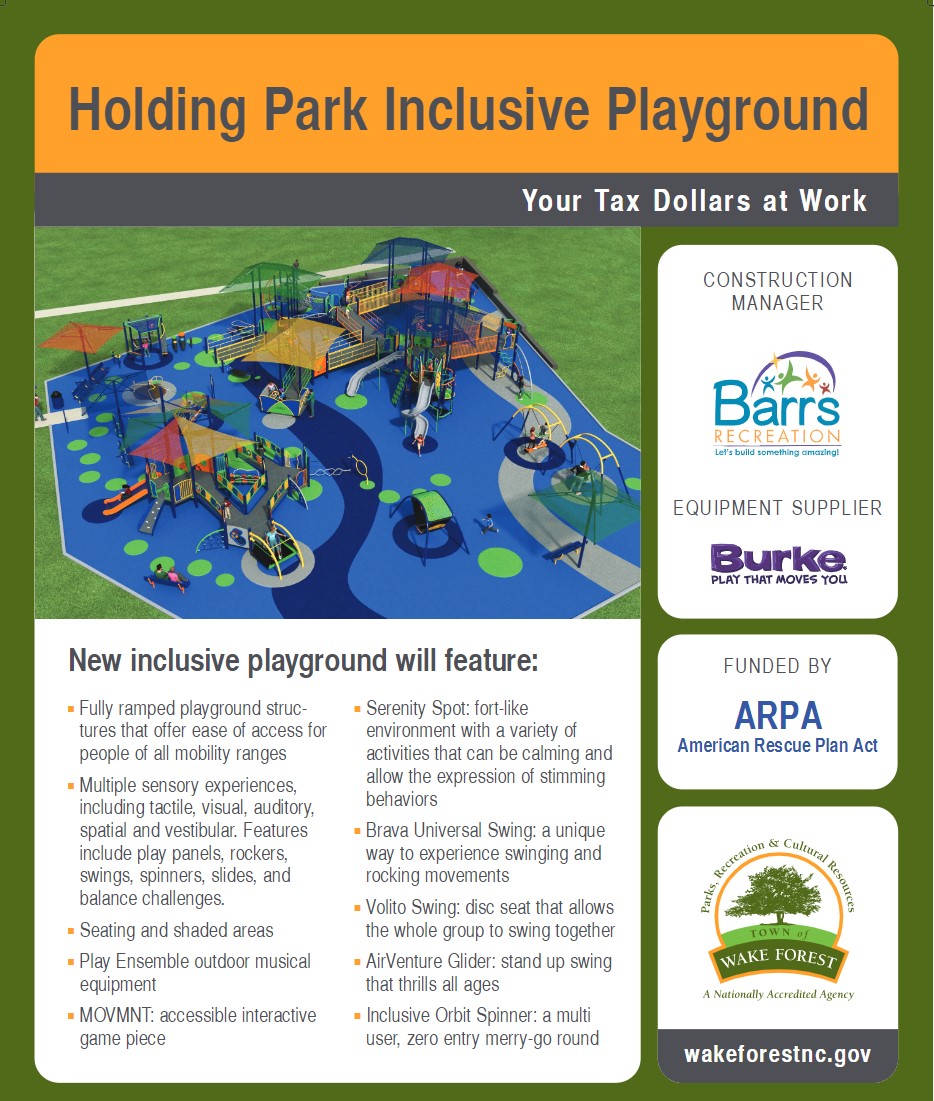 In February 2023, crews are scheduled to begin installing an inclusive playground at Holding Park. Upon completion, the new playground will feature:

Weather permitting, the work is expected to be completed by June 2023.

This project is supported by a grant from US Treasury as part of the American Rescue Plan Act (ARPA) Coronavirus State and Local Fiscal Recovery Funds award totaling $14.5 million. For more information, visit https://bit.ly/TOWF_ARPA.

Holding Park at 133 W. Owen Avenue was named for 5 acres of land donated by Dr. Solomon Pace Holding (1871-1951) a Wake Forest Physician and his wife, Eva Dunn Holding. The land begins at the corner of S. Main and W. Owen Streets and extends west along Owen. It was developed in several stages. The first being the building of the Community House from 1938 -   1942. Although the land was provided by Dr Holding, the funds for the building came from President Roosevelt’s Works Progress Administration (WPA). The Community House has been used continuously for public and private gatherings and is listed as a contributing building in the Wake Forest National Register Historic District. The original 1940s swimming pool was reconfigured in the 1970s and recently replaced by the Holding Park Aquatic Center in 2017. The large stone retaining wall and stairs on the south side of the pool are the original 1940s diving board platform.

Per oral history there was a building on the Holding property that was used during World War II to machine parts for the Army’s tanks. This building was sited in the playground area. New playground equipment was installed in 2001.

in the 1950’s and the hillside used for concerts in the park in the 1950s and 1960s. A Garden was started but not completed until 2020 when the Neuse River Hawks created a Butterfly Pollinator Garden with over seventy varieties of plants, many of which were donated by Wake Forest citizens.

In addition, Zua Pace Mitchell Davis who lived in the brick home immediately to the south of the Holding home on Main Street donated a portion of her property in 1964 to enhance Holding Park.