It is easy to say that each and every person is affected by one or more traditions in their life. The fire service is no different. From the color of our fire trucks to the design of our patch, tradition is a major part of the Wake Forest Fire Department and the fire service as a whole. From the moment that a "rookie" joins our family they are introduced to the many traditions we live by. Below is an explanation of some of these traditions.

We take great pride in the design of our department patch.  Each element of our patch has special meaning.  Wake Forest Fire Department members wear this patch with honor.

To begin, the maltese cross is a "badge" of a firefighter and represents charity, loyalty, gallantry, generosity to friend and foe, dexterity of service, and protection of the weak.   It is also carried to honor those who carried the insignia before us.   More information about the Maltese Cross can be found below.

In the center of the WFFD Patch is a picture of Binkley Chapel. Since 1958, Binkley Chapel has sat on the campus of South-Eastern Baptist Theological Seminary and served as an icon for the town and its residents. Under the picture of Binkley Chapel is three dates. 1922, 1955, and 1983. These three dates signify the organization of the Town of Wake Forest Fire Department (1922), the organization of the Wake Forest Rural Fire Department (1955), and the merger of the Town and Rural Departments in 1983.

Finally, our patch is outlined with a black and gold stripe paying homage to the birthplace of Wake Forest College (Now Wake Forest University located in Winston-Salem, NC) and it calling Wake Forest home from 1834-1956. 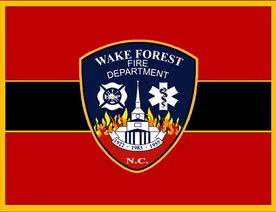 When you see any Wake Forest Fire Department vehicle or the uniforms that our members wear on duty, you will notice that we have the slogan "Saving Lives, Our Prime Goal" on them. This slogan explains what our objective is each and every day. It is a slogan that we live by, operate by, and are very proud to achieve each and every day we report for duty. Our late Fire Chief Jimmy Keith coined this phrase and used it several times through-out his 17 years as Fire Chief. It was adopted as our department slogan in 2009. 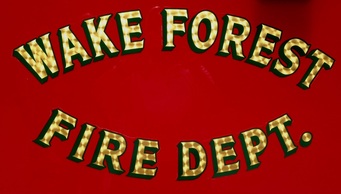 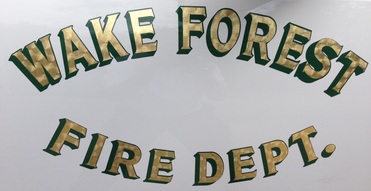 The Forest Green of WFFD

The Town of Wake Forest received its name in the early 1800's when the northern part of Wake County was described as the "Forest of Wake" due to the abundance of rural area covered in pine trees. To keep with the tradition of the name, early members of Wake Forest Fire Department added forest green to the fire trucks. This green can be found on all WFFD vehicles in the shadow of the gold-leaf lettering on the doors. 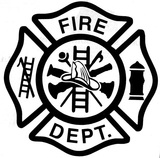 The Maltese cross is known  around the world as a symbol of the fire service. It is often seen painted on  fire trucks, on the clothing of firefighters, depicted on firefighters badges,  and is quite often the chosen design of firefighter tattoos.

The Maltese cross has its origins going back to the era of the Crusades and is named after the island of Malta which came to be the home  of the Knights of St. John. The Knights of St. John existed during the 11th and  12 centuries. To help identify friend from foe during the fighting, they needed  a  symbol that could be used to quickly and easily identify themselves. They chose  the Cross of Calvary (which would later be known as the Maltese cross) as their  symbol because the Crusades were battles fought for a holy cause. During  these battles, the enemies of the knights commonly used fire as a weapon. It was  not uncommon for a Knight to have to risk his own life to  extinguish a fire or rescue a comrade. Because of their ability to fight fires, and the pride and  honor they took in the care of their sick and injured, the Maltese cross evolved into a  fitting symbol of the modern fire service.  The cross has since come to  represent the principles of charity, loyalty, gallantry, generosity to friend and foe, dexterity of service, and protection of the weak.

The Star of Life

The snake and the staff in the  center of the Star of Life portray the staff of Asclepius who, according to  Greek mythology, was the son of Apollo, the god of light, truth, and prophecy.  According to legend, Asclepius learned the art of healing from Cheron, the  centaur. But Zeus, king of the gods, was fearful that, with Asclepius'  knowledge, men might be rendered immortal. Rather than have this occur, Zeus
killed Asclepius with a thunderbolt. Asclepius was worshipped as a god and  people slept in his temples, as it was rumored that, in death, he effected cures of prescribed remedies to the sick during their dreams.

Asclepius is usually shown in a standing position, dressed in a long cloak, holding a staff with a serpent  coiled around it. The staff has come to represent medicine's most recognized  symbol. In the caduceus, used by physicians, the staff is winged, with two  serpents intertwined. Although it holds no known medical relevance, it  represents the magic wand of the Greek deity, Hermes, messenger of the gods.

In Numbers 21:9, the Bible  also makes reference to a serpent on a staff. "So Moses made a bronze snake and put  it up on a pole. Then when anyone was bitten by a snake and looked at the bronze  snake, he lived."

The most widely-accepted reason that fire engines are painted red dates back to the 1800s -- a time when there  was a LOT of competition between the fire brigades of neighboring cities and  towns.  The firefighters of each brigade took great pride in their pump.  Each brigade wanted their rig stand out by being the cleanest, having the most brass,  or being a regal color. Because red was the most expensive color, that's what color  most crews chose to paint the  pump.

Other sources cite the  tradition of painting fire engines red going back to the early 1920's. Henry Ford wanted to make cars  as inexpensively as possible and only offered cars in one color:  black. With all of these black vehicles on the road,  the fire service began painting their vehicles red in an effort to stand out.

Today, just as you have many  more choices of colors available to you for your vehicle, so do the fire engine  manufacturers, and it is not uncommon to see white, yellow, blue, orange, green, or even black fire engines, in addition to red.  And while some studies  hint that colors such as lime-green may be more visible to the public than  traditional red, the vast majority of fire departments continue to use red fire  engines -- a color instantly recognized by everyone as that of a fire engine.

The Wake Forest Fire Department stays with the tradition of the fire service and paints our fire trucks red. Wake Forest has had one white truck it our history but no other suppression vehicles since, only administration vehicles are white now. Our traditional paint scheme is white over red however we do have an engine that has black over red. This engine comes from the former Falls Fire Department. We have proudly joined forces with Falls and continue to honor their tradition with the black over red.