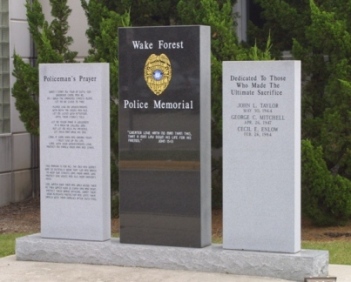 The Wake Forest Police Memorial is dedicated to Wake Forest police officers who have lost their lives in the line of duty.

The suspect was apprehended a short time later and died in the state's Central Prison gas chamber.

On April 26, 1947, Chief George Cree Mitchell, 54, was fatally injured when his car collided with a bus near the Town of Forestville. The bus driver had reported he had swerved to avoid a car that had just pulled out of a local gas station. On his way back to Wake Forest, Chief Mitchell was apparently unable to turn quickly enough to avoid the crash.

On February 26, 1984, Officer Cecil Enlow, 41, suffered a fatal heart attack after making an arrest at a domestic disturbance call. When he arrived on the scene he was met by a man with a shotgun. He was able to talk the man into giving up the shotgun and arrested him. Officer Enlow transported the man to jail.

After returning to town he suffered the heart attack due to the stress from the incident.

It is with sincere appreciation that the Wake Forest Police Department recognizes the following businesses and individuals who have made this memorial a reality: