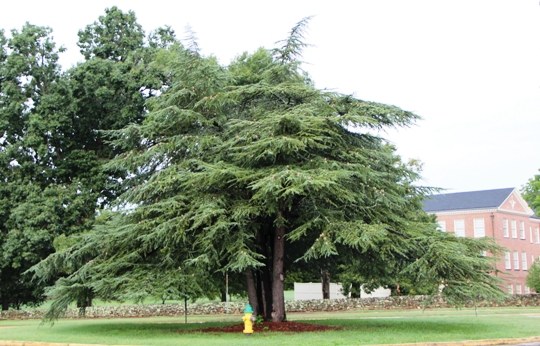 The Town of Wake Forest logo (shown left) was modeled after an actual tree that grows in downtown Wake Forest.

The "town tree" (shown right) is located on North Avenue between Southeastern Baptist Theological Seminary and the railroad tracks.

Once and for All - What Kind of Tree is It?

The town tree is a deodar cedar (Cedrus deodara) that was planted in the mid-1930s by a Wake Forest College professor.

The professor may have mistakenly believed the tree to be a Lebanon cedar (Cedrus libani) - which once thrived across Mount Lebanon in ancient times - and planted it because of its biblical significance.

As an interesting aside, the tree was also misidentified as an Atlas cedar (Cedrus atlantica) in 2011 when it was nominated for the Triangle J Council of Government's Capital Trees Program - which it won in 2012.

The matter was finally settled in 2014 by another professor - this one an NC State University dendrology professor - who positively identified the tree as a deodar cedar.