The Town of Wake Forest is implementing a Complete Street vision along Stadium Drive (SR 1930) from Capital Boulevard (US-1) to North Wingate Street (SR 1954). This will improve both vehicle and pedestrian safety as well as traffic flow. Work began in spring 2018 and is anticipated to be completed by late 2019.

The typical section includes three lanes with curb and gutter, left-turn lanes at intersections and driveways, a 10-ft wide multi-use path on the south side, 5-ft wide sidewalk on the north side, wide striped shoulders on each side of the roadway, a pedestrian refuge island, pedestrian signal at Rock Springs Road, high visibility crosswalks and ramps, and accessible transit stops with a new bus shelter.

The Stadium Drive Complete Street Project is in its final stages. Fred Smith Co., a private contractor working on behalf of the Town of Wake Forest, has traffic flowing in the designated traffic pattern and is actively completing the center median for the roundabout located at the intersection of South Wingate Street and Stadium Drive.

The final asphalt surface will be installed in the next few weeks, dependent on weather and temperature since asphalt cannot be placed beneath certain thresholds. Fred Smith Co.’s landscaping subcontractor is actively installing landscaping with topsoil and sod extending from Glencoe Drive and South Wingate Street. New trees and shrubs are also being installed.

Fred Smith Co. has also completed the four bus stops located within the corridor which are complete with benches, trash cans and cigarette butt containers. The Wake Forest Streets Department will also install a new bus shelter along McDowell Drive once the project is complete.

Additionally, Fred Smith Co. completed the sidewalk connection between South Wingate and North College Street - formerly a stone paver sidewalk that was removed due to degradation.

A traffic signal at Rock Spring Road was added after construction began and the metal mast arm poles is scheduled to be delivered in the next few weeks and installed by the time students return to school after the New Year.

Extending from Capital Boulevard/US 1 to North Wingate Street, the Stadium Drive Complete Street Project is designed to improve vehicle and pedestrian safety, as well as traffic flow. Once completed, the typical section of Stadium Drive will include three lanes with curb and gutter, left-turn lanes at intersections and driveways and a 10-feet wide multi-use path on the south side. Other features will include five-foot wide sidewalks on the north side, wide striped shoulders on each side of the roadway, a pedestrian refuge island, high visibility crosswalks and ramps, and accessible transit stops.

Crews will be paving between the Bridge over Richland Creek and Wingate in order to widen the roadway.

Phase I of the project is nearing completion with the final striping pattern in place from Glenco Drive to Richland Creek. The Contractor will place a final layer of asphalt once the entire project is completed and pave the Multi-Use Path.

Crews are working on two of three retaining walls along the project. Wall #1 will begin once traffic has been shifted to the southern widening. Wall #2 is nearing completion with only stone veneer needing to be installed. Wall #3 piles have been installed. Concrete panels will be installed in the coming weeks. 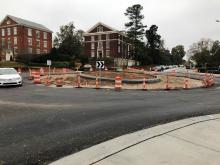 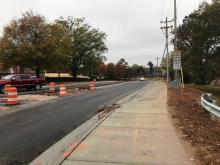 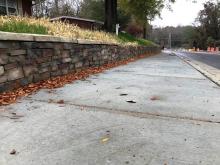 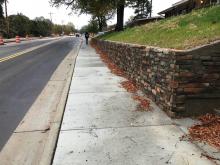 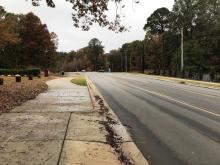