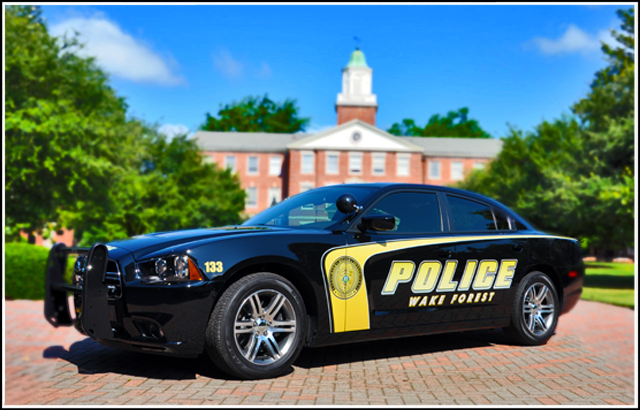 For the first time in 14 years, the Wake Forest Police Department is sporting a new look.

In May 2012 the department introduced a new, more modern design for its fleet of patrol vehicles featuring a new color, bolder graphics, and a new logo. Most notably, the makeover includes a transition from dark blue vehicles with off-yellow striping to black cars marked with a prominent gold stripe and bold lettering.

According to Police Chief Jeff Leonard, the redesign will result in long-term cost savings. Since black is a less expensive color than the current shade of blue, the move will save the department approximately $500 per vehicle.

New Vehicles Win International Award
August 23, 2012
The Wake Forest Police Department is pleased to announce the redesign of its fleet of vehicles won the 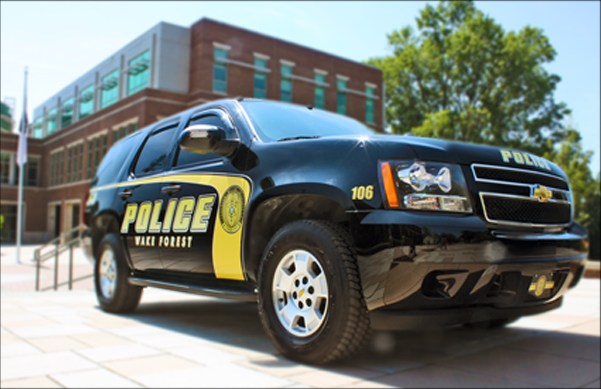 "This is especially exciting because the new design incorporated comments and suggestions by all of our officers and staff, so this was truly a team effort," said Police Chief Jeff Leonard. "We've heard nothing but positive comments from the community about our redesign, so we couldn't be more pleased."

The judges said: "This car is sharp! Its universal graphic is very eye-appealing. We especially like that the design fits two different vehicles. It looks great on both makes and models. The black and gold color scheme is dramatic."

More than 500 vehicles were entered in several categories for the contest that included designs for different makes as well as SUV, Community Relations, motors, SWAT and vintage police cars.

The judges included a Police Chief from Bedford Park, Illinois; a Police Marshal from Kingsford Heights, Indiana; and a car industry expert who specializes in police vehicles and equipment. The judging also included readers of Law and Order magazine.

The judges focused on the overall appearance of the vehicle, as well as the safety of the officer driving and the ability to identify the automobile as a law enforcement vehicle.

Among the notable new safety features on the car are the more visible and versatile lighting.