PLEASE NOTE: Local landmarks are private residences and not open to the public. 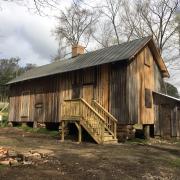 The Ailey Young house is a saddlebag style house that was likely built around 1875, or slightly earlier. It is a rare example of Reconstruction Era post-Civil War housing for the African American working class.

The Ailey Young House may be the oldest remaining African-American historic building in Wake Forest. It also has historical significance as the dwelling of one of the town's most important African-American citizens Allen Young.

One of Ailey Young’s 12 children, Allen Young, opened the town’s first school for African American children in 1905.  The interior of the Ailey Young House will be open to the public once renovations are complete. 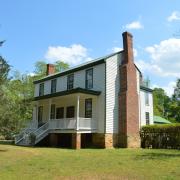 The Battle-Purnell House was designated a local historic landmark property on August 20, 2002.

This house was built by Josiah Battle in 1802-1803. It is a remarkably intact 2-story, T-shaped, Georgian-style dwelling.

Both the five-bay main block and the rear ell of the house are two-stories tall set on a high stone basement. The house is clad in plain weatherboards and has six-panel doors, 9-over-9 wood-sash windows, and three-part molded window and door surrounds.

The kitchen addition was built in 1996 of old materials in keeping with the historic building. 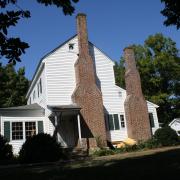 Originally situated about 3.5 miles south of Wake Forest, the home is now situated well within the Town limits.

The originally Federal style house received a Greek Revival makeover around 1850. The interior floor plan was altered at the time, and a front porch was added.

Over the years the home as evolved to fit the various occupants needs, however the house is significant due as an example of high-style rural domestic architecture of the federal period. 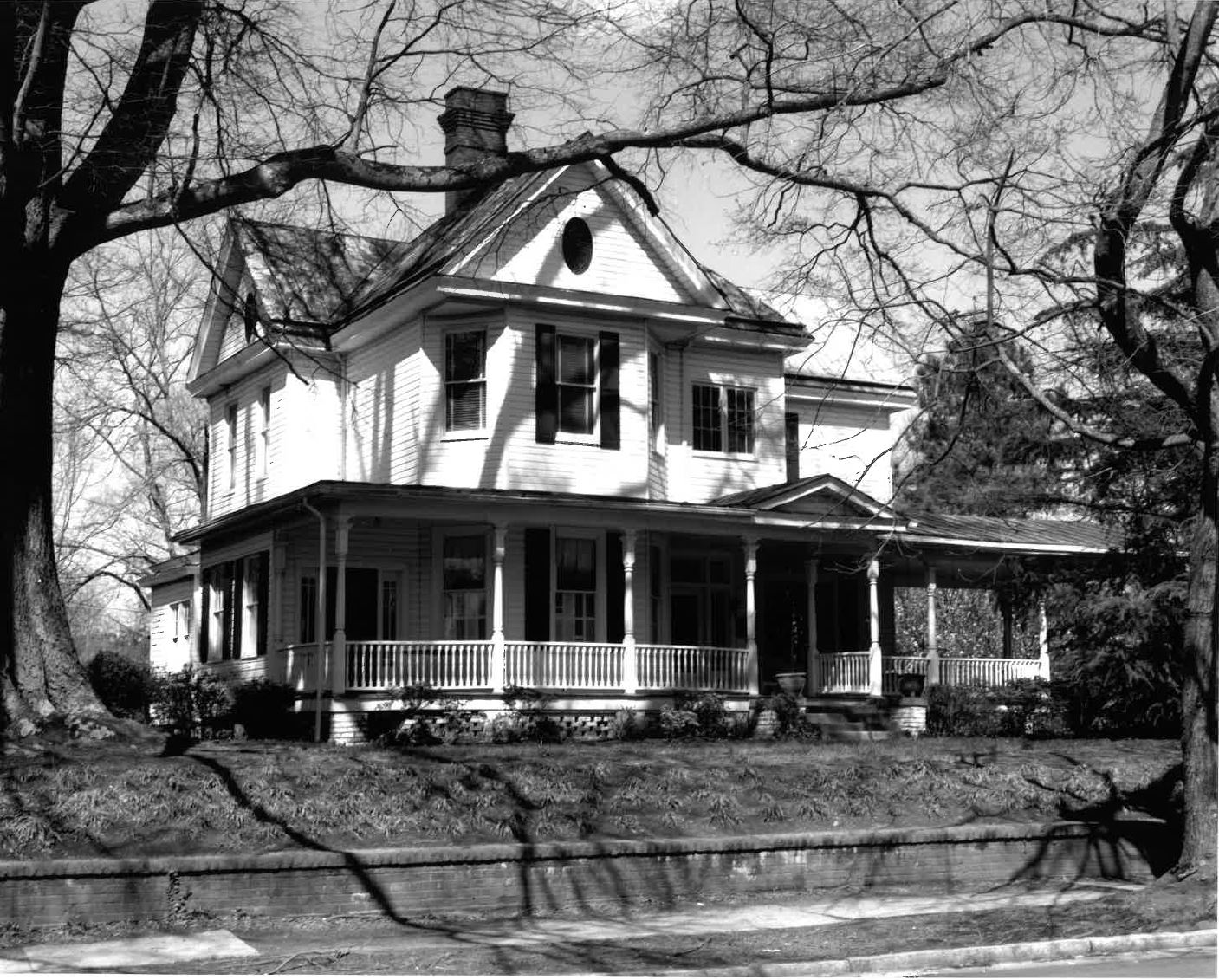 This Queen Anne-style house was designated as a local historic landmark on March 14, 1991.

The I. O. Jones House was constructed circa 1903 by Robert Freeman and his wife, Genoa Rox Hunter Freeman, as a wedding gift for their daughter, Elizabeth, and her husband, Ira Otis Jones.

The house is a large two-story house with a pyramidal roof, interior chimney, and a front-gabled two-story wing with a cutaway bay window.

The pedimented gables have oval-shaped windows. One-over-one sash windows appear to be original.

A later Craftsman-style entrance vestibule was added in front of the original entrance, and a small sunroom above it, perhaps in place of an original open upper-story porch. 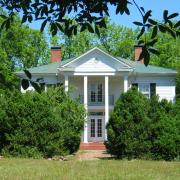 Oak Forest was listed in the National Register of Historic Places in 1998 and designated as a local historic landmark property on October 21, 2008.

This circa 1807 house was originally constructed in the Federal style with a hall-and-parlor plan. The original south-facing porch with hand-hewn columns is still in use.

The slender, round columns are unique in that they were carved in one piece to include the capitals and bases.

At that time the front door was changed from south elevation to the west. The double doors were centered in a rectangle of horizontal boards, and the veranda was covered as seen in an 1887 photograph. An 1894 photograph shows an added portico.

In 1895, a returned-eave pedimented roof, four Doric columns, and a sawn work balustrade to the roof were added to the west porch.

According to local African American oral history the site of the Friendship Chapel Cemetery was a gathering place for enslaved people from the nearby Ligon, Dunn and Hartsfield plantations. Gatherings would often happen at night in secret to celebrate milestone events and religious holidays.

After the Civil War, African Americans were motivated to start their own congregations. Nelson Ligon began Friendship Chapel Baptist Church in 1867 on the same parcel where the cemetery was located. Cemetery mapping was completed in 2017 and able to identify over 400 potential graves. Ground Penetrating Radar was used in a portion of the cemetery and able to identify 277 graves, including one possible mass grave.

Members of the congregation provided oral accounts of a possible mass grave containing the remains of victims of the Spanish Influenza. Confirmation of this grave came with when the GPR picked up on a mass grave within the cemetery. Scientific confirmation of the existence of these graves allows for verification of oral histories of Wake Forest’s African American community.

The Friendship Chapel Old Cemetery site provides a rare glimpse into the formation of African American communities in the rural South before and after emancipation. 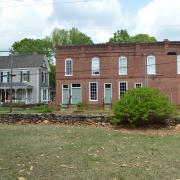 Located on the corner of North Main and North Avenue, the Powers-Dodd House and Store were constructed in the 1890s by Dr John Benjamin (Ben) Powers.

The two-story center hall Italianate style house was constructed first around 1893 and the store was built approximately five years after.

In 1897 Dr Powers fell ill. Believing he was dying and concerned for his family’s ability to provide for themselves, he constructed a store on the corner lot next to the family home. The store was home to many uses over the years including a grocery store, restaurant, ice cream shop, fraternity house, bookstore, and its current use: an event space. Both the home and store maintain a high level of historic integrity.

The Powers Store is the most intact commercial building of the late 19th century remaining in Wake Forest.

The Powers house remains the most intact of the Town’s Italianate houses due to minimal additions over time. 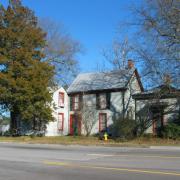 The Purefoy-Chappell House was listed in the National Register of Historic Places on October 22, 2008 and designated as a local historic landmark property on December 16, 2008.

The house is comprised of four major sections: the original c. 1838, 1½-story, side-gable, single-pile main block with a rear shed wing; a c. 1895, two-story, side-gable, single-pile addition built onto the south gable end of the original house; a two-room, side-gable kitchen/dining building dating to c. 1838 that was connected to the main block and the c. 1895 addition by a one-story hyphen containing a modern kitchen added in 1974.

A small one-story shed roof addition was built c. 1960 onto the rear of the c. 1895 addition to house a small bathroom. 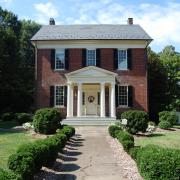 The 1838 South Brick House is the only extant building of the original permanent campus of the Wake Forest Institute, later Wake Forest College.

Built as faculty accommodation, the house is an excellent example of Greek Revival-style architecture and the only local example of residential masonry construction from the antebellum period.

In addition, it was built by John Berry, who later designed and built the Orange County Courthouse among other buildings in Hillsborough.

In 1855, the college sold the house to a private owner, and it has remained in private ownership since that time.

The South Brick House was designated as a Wake Forest Local Historic Landmark in 2013 and officially listed in the National Register of Historic Places in 2014.