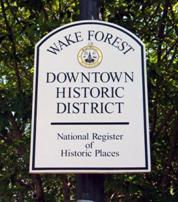 The Downtown Wake Forest Historic District was listed on the National Register of Historic Places on February 20, 2002 and has a period of significance from c. 1890 to 1951. It is the commercial core of the Town of Wake Forest. All buildings in this district were built between 1890 and 1949 and range from one story to 3 stories in height. Most are of brick construction but a few built during the 1940s are of cinder block. Many buildings were built in the mid-1910s after a devastating fire. Typical façade features include metal cornices, corbelling and other decorative brickwork, upper-story windows in flat-headed or segmental-arched openings, and storefronts with display windows, transoms, and recessed entries. Most buildings are only remotely influenced by period styles but a few from the 1940s exhibit stylistic influence, typically the Colonial Revival and Art Deco styles. The historic functions of the buildings represent the usual variety of a downtown, including upper floor apartments. The district's streets were paved and concrete sidewalks installed prior to World War II. 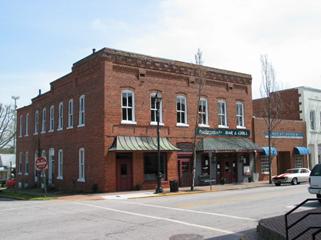 The district retains its basic character and integrity. Commercial buildings retain character-defining features such as relatively unaltered upper stories, parapets and cornices, and, in most cases, storefronts with display windows, transoms, recessed entries, etc. Where modern façade improvements were made, most are sympathetic with the character of the original. Obviously modern buildings were excluded from the district, helping to define the boundaries.

The establishment of the Wake Forest depot in 1874 stimulated the growth of the town and marked the beginning of commercial development within the district boundaries. Lots were laid out on the east side of the railroad tracks near the depot, partly on college land, and the area was incorporated by the state legislature in 1880 as the Town of Wake Forest College. The new lots were located on White Street, named after the second president of Wake Forest College, and cross streets were named after another president (Wait), a professor (Owen), and the owner of the plantation on which the college and town developed (Jones). The college community represented the district's principal clientele, at least at first, but the district also served the commercial needs of the surrounding countryside and, after 1900, of the several hundred workers and dependents from the Glen Royall Mill Village, located on the northern edge of town. 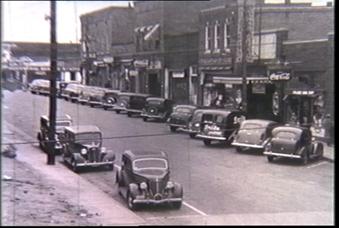 Frame buildings were more susceptible to fire than brick ones and at least two fires are known to have depleted the district's first generation of commercial buildings, the most recent large scale fire occurring in 1915. A number of brick buildings were constructed immediately after the 1915 fire including the Arrington Building, Mangum's Grocery, and Jones Hardware. For a brief period before the construction of specialized filling stations beginning in the 1920s, gasoline was sold from pumps located in front of White Street stores. One of these survives – a Bowser Enclosed Long Distance Pump that stands in front of the Wilkinson Building. 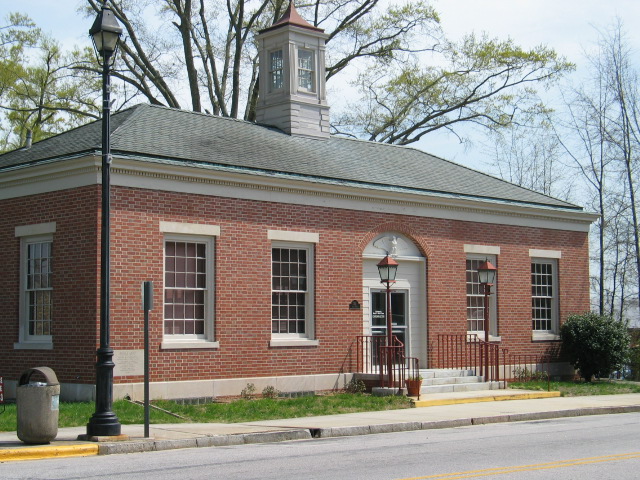 Buildings of the 1930s and 1940s show a shift toward greater architectural sophistication in the district. The Colonial Revival style enjoyed the greatest popularity, perhaps reinforced by the predominately Colonial Revival character of the construction at Wake Forest College. One such building is the 1940 Wake Forest Post Office, designed in accordance with standardized Treasury Department plans and specifications. The c. 1940 Ben's of Wake Forest Building shows banded parapet brickwork that is Art Deco in character and the Lovelace Building suggests Moderne influence. Another development of the 1940s was the use of cinder-block construction, such as seen in the late 1940s J. W. Fort Barbecue Restaurant. 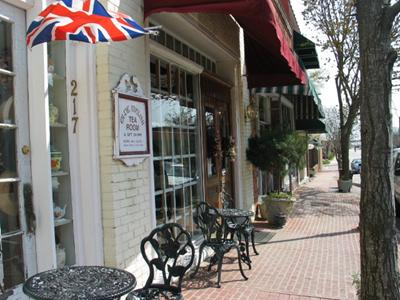 A local tragedy resulted in the construction of the railroad overpass in 1935. Tradition holds that the overpass was constructed to replace an at-grade crossing after an accident involving a school bus filled with children. It is supported at its two ends by abutments with angled walls and scored surfaces. Inside the abutments at the two edges of the street are arcades that run parallel to the street and are supported by stout square-section pillars. Above, at the level of the tracks, are balustrades with arched openings. 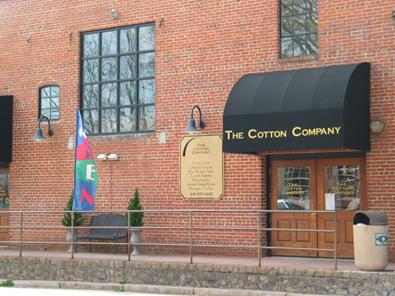 Primarily due to the move of the college to Winston-Salem development in downtown essentially ceased by the early 1950s. Only one building has been built along S. White Street between East Roosevelt and Owen Avenues since, the 1971 Fidelity Bank (not included in this district). Downtown has compensated for the growth of suburban shopping centers by attracting specialty shops, restaurants, and professional offices. A growing appreciation of historic ambiance among Wake Forest's citizenry and the popular Renaissance Plan for the Heart of Wake Forest focusing on downtown have benefitted the downtown and inspired recent renovations and façade improvements, including the tax credit conversion of the W. W. Holding Co. Cotton Warehouse into an artist and gift emporium.